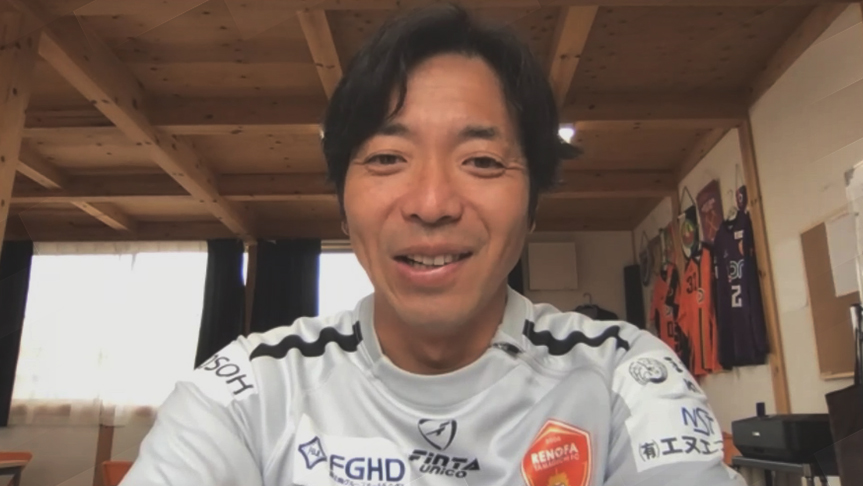 I believe we can discover something new with the help of PSD.

Masaru Simida, a trainer of Renofa Yamaguchi U-18 (Japan) are leading players on and off the pitch. He will talk how the team reacted to the emergency situation of Covid-19, and how the team is using PSD under the circumstance. (This interview was taken on December 2020. Mr. Sumida is currently working as U-13 trainer and the head of education department in Renofa Yamaguchi)

Could you tell us about your career briefly?
I started my career as a trainer in a club called Leone Yamagucchi about 15 years ago. At that time, I was like Jack of all trades, doing pretty much everything in the club. For example, my job included creation of revenue stream, sales, and of course, to train players.

Leone Yamaguchi have joined an academy of Renofa Yamaguchi since 2015.
In my twenties, when I was learning how to run a club in school called Japan Soccer College, I said that I will make Leone Yamaguch Professional club in 12 years at the fastest in front of students. Everyone laughed at me that time, however, while I was trying to achieve something, Renofa Yamaguchi was founded, and the club formed a merger with Leone Yamaguchi. So, that proves if you work with passion, that will drive you to where you want to be.

Please tell us about your job now.
I am now working as a trainer of Renofa Yamaguchi U-18 team. My job is to train players, to communicate with their parents, to make budgets for tournaments and so on, and for last but not for least, to support a head coach and covering general information of all players.

Please tell us about the outline of your academy.
We have U-18A, U-18B, U-15, U-15B, U-13, U-12, U-12 Leone, U-10 in academy. Up until U-15, players join our academy through the selection test. As for U-18, players join the team through both selection and scouting. For U-15 and younger categories, if a player can come to our training ground less than an hour, he or she can join. If it takes longer, it will be too much effort for players to come to the training. In their growth period, we want players to learn not only football, but also other things.

We heard that all the players in U-18 are living in the same dormitory.
That is right. There is a player whose house is only 5 minutes away by bicycle, but he lives in the dormitory as well. The concept of this it to make everyone spend a regular life. The most important element is nutrition. Currently we spend about 700 euros for one player per month. As for regular life, if they live in a dormitory, sleeping hours will always be the same and this make players spend healthier life.

Was there any impact caused by Covid-19 ?
When the state of emergency was announced by the government, we contacted parents of all the players, and for parents who requested their players to come home, we accepted it. As a result, about 20 players stayed in dormitory, and 16 players went home.
We gave a training menu to those who went home to keep their physical condition. Players stayed in dormitory did core training every morning, and after that, they went for 7~10 km of running. We tried some new things as well, just for a change. One of them is to hold a debate session within players. To improve players’ verbal and expression skills, we gave some specific themes to debate.

When the team is reunited, how was the reaction of players?
We received daily report from players who went back to their home. However, regardless of whether you submit a report or not, some players keep on training, and some do not. And by the shape of each players’ body, it was obvious who did the training and who did not.

Please give us a feedback of PSD.
We use the platform to share things with trainers, to consult players’ information. If we manage this tool more efficiently, I believe we can discover something new. I am quite positive about that.

Is there anything that you did to make your colleagues use?
I did some preparation, such as entering some activities and scheduled games. By doing that, my colleagues only need to login to see various information. In addition, I taught how to use PSD when there was a meeting among trainers. When implementing PSD, I also created an account for players, as a result, players send feedback via App after each training.

Lastly, is there any request to PSD?
Football nowadays and visual devices are closely bonded, so I hope we can use Video module more. At the moment, only trainers can put a tag on particular players, however, if players can put a tag through their phones, there will be more interest. So, I am hoping that there will be some modules that players can add. Additionally, it would be helpful if we can consult players from other clubs in Video module. The standard of players is different depending on places, and if trainers realize that, that will drive them to create better trainings for sure.