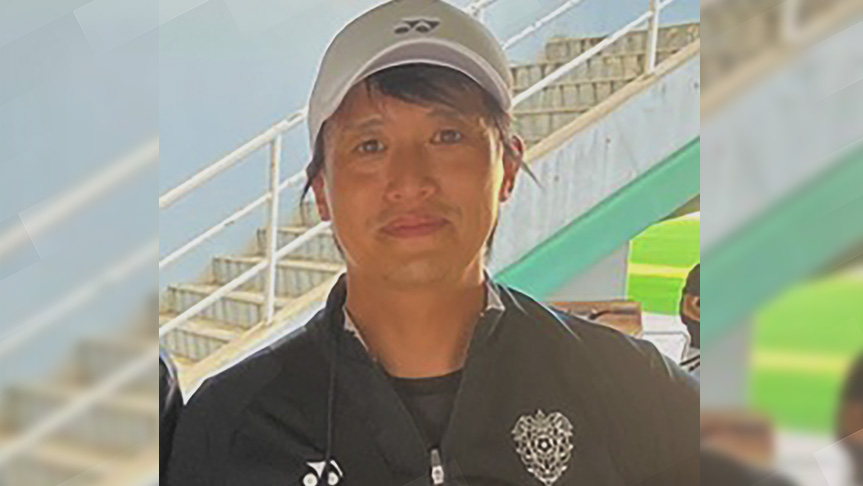 If things you used to feel or think become words or numbers, that is a dramatic change. When you see things that you didn’t know or you didn’t understand, a conversation starts. That is why collecting player data is so precious.

Could you introduce your career briefly?
After I ended my career as a footballer at Sony Sendai in 2000, I started coaching in an academy of Vegalta Sendai. I worked at Sendai for 21 years, and during that time, I taught players from every single category such as school, U-12, U-15, and U-18. Also, as a part of Japan Football Association’s program, I was given a chance to work in Cambodia as a manager of U-14/15 Cambodian national team.

You were appointed as a Head of Coaching at Avispa Fukuoka’s academy, in 2021.
When Fukuoka gave me an offer, I was thinking to myself that if I want to improve more and build up a better career, I need a new challenge in a different environment. I wanted to follow how my players in Sendai would develop themselves. Also, it was not easy to leave Sendai where I spent half of my life, however, I made up my mind as I wanted to move forward.

Tell us about your current role.
My job is to help players’ promotion to the top team and to think about their pathway after being promoted. As I have many things to do, it is hard to describe my role it in a few words, but I communicate with many people, and that includes Avispa’s president, the technical director of the top team, players, their parents, and coaching staff.

Please describe the academy of Avispa Fukuoka in a few words.
Our policy is to move one’s heart and to win. We aim to play aggressively with speed and seek a victory with unity. Most players in our academy are from the Kyushu area and players from younger categories are mainly from the Fukuoka prefecture. We usually recruit players outside Fukuoka over the age of 15 or 16.

Takehiro Tomiyasu who plays for Arsenal is formed at Fukuoka’s academy.
He’s a first class player with a bright future ahead. We are now analyzing how we developed him as a youth player and what the ideal youth player is. We have some information about Tomiyasu when he was at Fukuoka. His main strength was his personality and anticipation skill. So when we train with kids in Fukuoka, we tell them and ourselves, “Tomiyasu was not physically gifted nor fast. How you face each training is the most important aspect”.

Information from the past is always useful, especially when the player is successful now.We never know when player’s talent is flourished. That’s why keeping the records are important. If we keep a record, there’ll be some additional value. Data is a legacy for the club, and we need to have a certain platform to share it. For us, ProSoccerData is the platform where everyone can share player data.

How did you implement PSD in Fukuoka?
At the beginning of a new season, I held a meeting with all the coaching staff members. In that meeting, I maintained the importance of collecting data and announced that we will use PSD. As I announced clearly, all the coaches understood that to enter the data in PSD is part of their job. When it became a custom for coaches to enter the data, our work went more smooth than usual. Coaches from different categories can track one specific player’s data and this creates a “let’s improve this player together” mentality, which is wonderful.

Which PSD module does the club use the most?
I’d say “game reporting”. After coaches from each team submit a match report, I always give a feedback. There’s a video URL with it so anyone can watch how the game was like. There are several other modules that we use as well, but when ever we collect data, we try to centralize them in PSD.

Were fellow coaching members able to use PSD from the beginning?
We helped each other and got used to it. Of course, it is hard work but they did a great job. When you start using PSD there’s no data and you tend to doubt if entering data would have a positive impact on a club. However, after one year, things become more visible and you find out that hard work is paid off. That drives you even more to keep on using PSD.

How important is collecting data in your opinion?
If things you used to feel or think become words or numbers, that is a dramatic change. When you see things that you didn’t know or you didn’t understand, a conversation starts. Something like “you evaluated this player a bit low, but was he that bad?”. On the other hand, if there is nothing written in words or numbers, possibly, there won’t be as much conversation. That is why being able to consult players’ data is precious. It takes some effort, we know, but so as to collect the right data, all we need to do is to prepare in the right way.