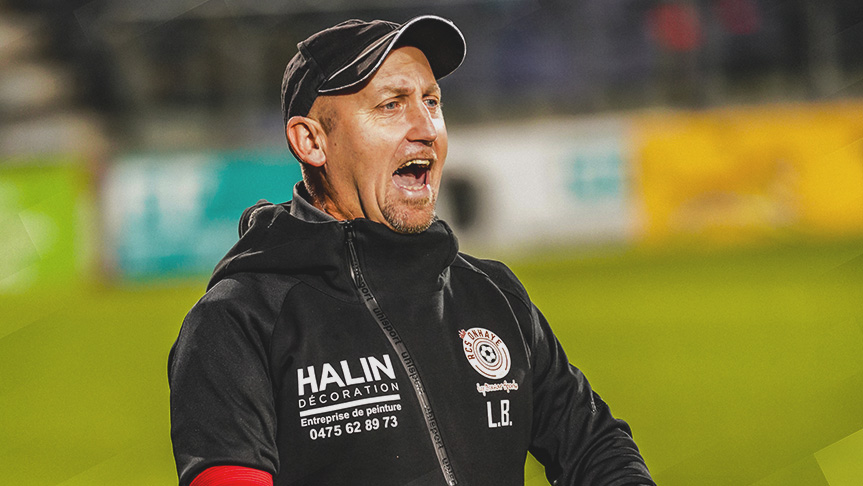 We don’t recruit players but we try to convince them through our unique methodology during our yearly Open Day.

Could you briefly introduce yourself?
My name is Lionel, I am 48 years old. I've been with the club for 10 years and I’m responsible for the youth academy. When I arrived at the club, the first team was in the first provincial league. There were 13 teams (provincial and regional) in the club and the age pyramid was reversed. A training plan was put in place with continuity. Now our teams play on interprovincial (IP) level and the first team plays in the third national division, all with youngsters from the club.

How would you describe your club in maximum 5 words?
The first word is family. We have to keep the family spirit despite the development of the club. We went from 130 players to 320 players, from 13 to 26 teams, so there is a bigger population and a much bigger network in terms of kilometres around the club where the players come from.

Humanist. We are very much focused on the human aspect. We train players, but we also train tomorrow's citizens. We really try to ensure that they get a sports education, but also outside of that, we teach them to have values and respect.

Ambitious. We continue to be ambitious in the development of the club.

Professional. We have an elite methodology in place. The word I like to use is avant-garde. We work with PSD, which corresponds perfectly to what we want to do. The first team players and the U23s have GPS trackers and there are also smart cameras at the club, they film the games for the youngsters and artificial intelligence tracks the ball and the players.

What is the mission/vision of your youth academy?
The club's objective is to bring two youngsters from the club into the first team every year to discover the first team. That means they train with the first team once a week. Every year, there must be one more player who becomes a starter. We've managed to do it now and we want to maintain that.

We want the players to have quality training where fun is important. We have really put a lot of emphasis on supporting talented players. I think that all the tools we have put in place serve this purpose.

How did you successfully implement PSD in your club?
I didn't have any difficulty with it because in fact I had already used different platforms. I had made a website, we had an intranet at the club with a planning and with different roles.

What PSD-module do you use most?
I can’t say that I use one more than the other because I use everything. On the weekend I consult the match planning. On Monday I read the match reports. On Tuesday, coaches use the exercise drawing platform to create training sessions. We communicate all week and I monitor the schedule all week. Every day, I work with the chat to communicate with the coaches and players. For external communication or communication with parents, so for general communication, we use email.

One tool I really like using  is feedback. Giving feedback to the players via the platform is very good because it allows you to stay in touch with the players.

Where do you recruit players? Regional or national?
We have a system where we don't try to recruit players, but we try to develop them. During an open day we explain our methodology and how we work, and we show the tools we use.  I think that at our level there aren’t many clubs that have the tools we provide, so people are often very surprised.

The idea is to train at the base so that the player feels good with us and that he stays with us in the academy. We look for players in 11-a-side football. This means all the players we have not been able to train in 5-a-side and 8-a-side football. There are small recruitment sessions, we call them open days. The players who come from further away are goalkeepers. We have started a goalkeeper academy which has been rewarding because we have quite a few goalkeepers who leave for the elite clubs every year. We also use the PSD tool in match reports, the coaches put the players of other teams in who are interesting.

What club achievement or aspect are you most proud of?
I’m most proud that we were promoted to the second division with 12 players from the youth academy in the squad and with an average age of twenty-one and a half. We are proud of this because it was something that seemed impossible for others. You have to supervise young people, but we have created a context in which we have taken a majority of young players and complemented them with older players.

Last year, we implemented a partnership programme with a school. We are proud of this, because it is the highlight of the project.

What does the academy want to achieve within the next 3-5 years?
Very important is the goal and our goal is to develop players. That's the mission of the club. I hope in the next three to five years to continue helping develop players for the first team and maybe a player like Antoine Bernier who will make it to the first division. This means that there is not only one path in football. There are players who play in different divisions and then later join an elite team. We have a player who left last year to play for Seraing (U18 elite). I hope that he too will get the chance to play in the first division. What I want is that we train the basics  and when our project becomes too small for the player, our club  can serve as a step for him towards a higher level.