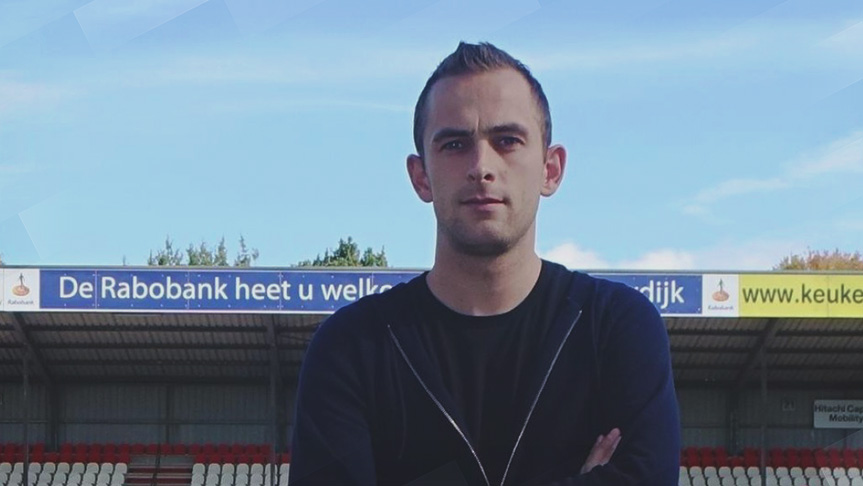 It is important that each player walks his own path. There is no single integrated approach that works for everyone.

Introduce yourself briefly.
My name is Christiaan Hindriks and I live in Emmen near the stadium. I have been the youth academy coordinator for 6 seasons. I am responsible for everything beyond the football aspect: that players do not have to worry about school, clothing, football materials, ... I’m also managing relations with other clubs, the Dutch FA, the parents, …

How would you describe your club?
Familiar, friendly, a normal club : that's a bit of the Drenthe culture actually. But we are also ambitious and fanatical. If you look at our region, we are actually quite a small club in the Netherlands. With the limited resources and staff members we want to achieve the maximum together in Drenthe.

What is the vision of the youth academy?
We wish to offer talented players from our core region - the province of Drenthe and part of the province of Groningen - a professional football education so that they can develop optimally and get the most out of themselves.

In addition, it is also important that each player follows his own path. There is no single integrated approach or working method that works for everyone. We look for a different method for each player that suits them: we offer the players tools and give them tips to develop further.

Do you recruit players regionally or nationally?
We mainly look really closely around our region. We have a regional development plan in which we frequently visit and support the amateur clubs in our region. In our region we only scout players from 8 to 16 years old. Above that age we often look on a national level because we can recruit players who do not fit in with other professional clubs or who do not really stand out there, but who might fit in our region. However, it is difficult because only five hundred thousand people live in the province of Drenthe, which is very sparsely populated.

Why did your club choose ProSoccerData?
We were looking for a player development system where we could combine all disciplines within our youth academy: from planning, communication and evaluation to video footage and medical data. After a long research we came across ProSoccerData and it met all the points that we needed.

How did you carry out the implementation?
Within the club we tested the platform during the first lockdown phase. Does it have the features we want? Does it work well for us or is it too extensive or too limited? After a 4 month trial period we knew that PSD works well for us and that it adds value to our youth academy.

We first introduced our trainers to the system: what we want to see in the system and how we want to work with it. We then explained how the system works at a parents' evening. We get a lot of positive reactions. In addition to the planning, you can also view videos of matches in the app, receive notifications if there is an event change,...

How do you communicate with players and parents?
For the most part communication takes place via ProSoccerData: the planning, mail communication as well as player feedback. It also removes a lot of unnecessary communication, because parents can quickly view when they are on vacation, when training is taking place, when the games are next season, ... We also think it is important to have a good relationship with their parents and this is done via Whatsapp group chats.

What initiatives did the club take to keep in touch with the players during the lockdowns?
During the first lockdown, we asked all players to perform and film certain exercises at home. Sometimes we hosted group training sessions over Zoom or Microsoft Teams and there were consultation sessions with trainers to discuss certain football aspects. Last season when the competition was canceled by the FA we organised training sessions on Saturday and we played mutual matches in different compositions and we stimulated the boys every week to continue to make progress.

It is good that you take those kinds of initiatives, but the real build up to a match, playing competitive games is a feeling that you cannot imitate. That is why we are very happy that we can now slowly but surely start competition again. We noticed a different dynamic in our groups.

Which club achievement are you most proud of?
We are delighted that, despite our limited resources and our relatively small youth academy compared to the other regions in the Netherlands, a number of players have made it into professional football. The most famous example of this is Kjell Scherpen. Kjell ended up in the first team through our youth academy. He played one season in the Eredivisie with us, then he made the switch to Ajax and this season he is under contract with Brighton. We are very proud of that but we also have many more players who are slowly but surely ending up in professional football and we hope that many more will follow of course. That is our big goal.

As a club we have played in the Eredivisie for the past 3 seasons, unfortunately we were relegated last season. If you notice how much our region revives now and you see what it does to everyone, then of course we only have one goal as a club: promoting back to the Eredivisie as soon as possible. Our region sometimes feels a bit disadvantaged compared to the rest of the country while we have quite a lot of beautiful things here in Drenthe that we can be proud of.

What does the academy want to achieve in the next 3 to 5 years?
We actually want to play at the second highest level with all our youth teams. That is division 2 in the Netherlands and we are already playing here with a number of teams. It is an ambitious goal because it means that we want to be one of the best 16 youth academies in the Netherlands. Despite the low population and our limited resources we want enough space to grow as a club. In the next 3 to 5 years, we will take further steps to improve our youth academy with the objective of belonging to  the top 16 academies in the Netherlands.