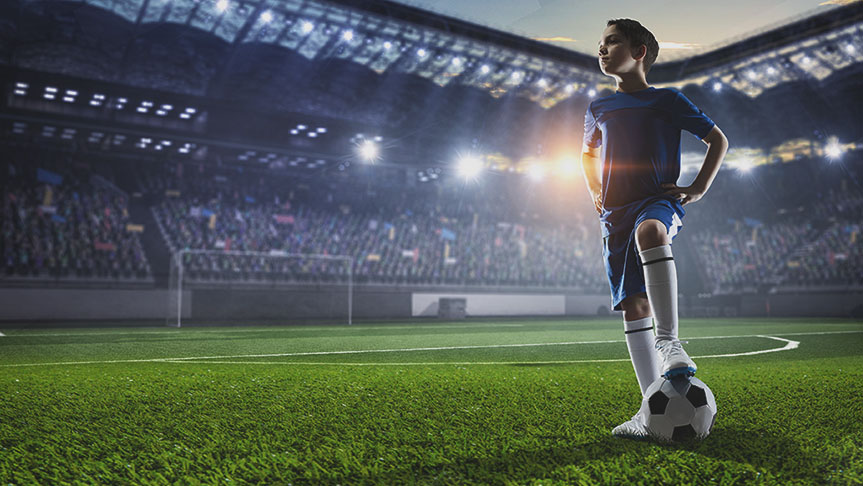 August 2017: 18-year old Kylian Mbappe makes a remarkable move from Monaco to PSG for a staggering amount of €180 million euros. Training youth players has become big business today but at which clubs are you most likely to become a professional football player?

The CIES (International Centre for Sports Studies), a research group specialized in the statistical analysis of soccer, has issued an extensive report* on clubs having trained the most players currently present in one of the 31 European football leagues. In this report we found 2 variables that were linked to the performance of youth academies: the number of trained players active in the highest division and the average number of minutes played by trained players in the first team.

UEFA defines a ‘trained player’ as a player who has played at least 3 seasons at a club between the age of 15 and 21 years. Based on this definition, AFC Ajax tops the ranking with no less than 77 (!) trained players who currently play in one of the 31 European football leagues. The Dutch club who won the Champions League in 1995 with no fewer than 8 (!) trained players on the field clearly stayed loyal to their Academy philosophy. With 69 trained players, Dynamo Kiev and FK Partizan are great runner-ups.

With 77 trained players in Europe, Ajax clearly stayed loyal to their training philosophy 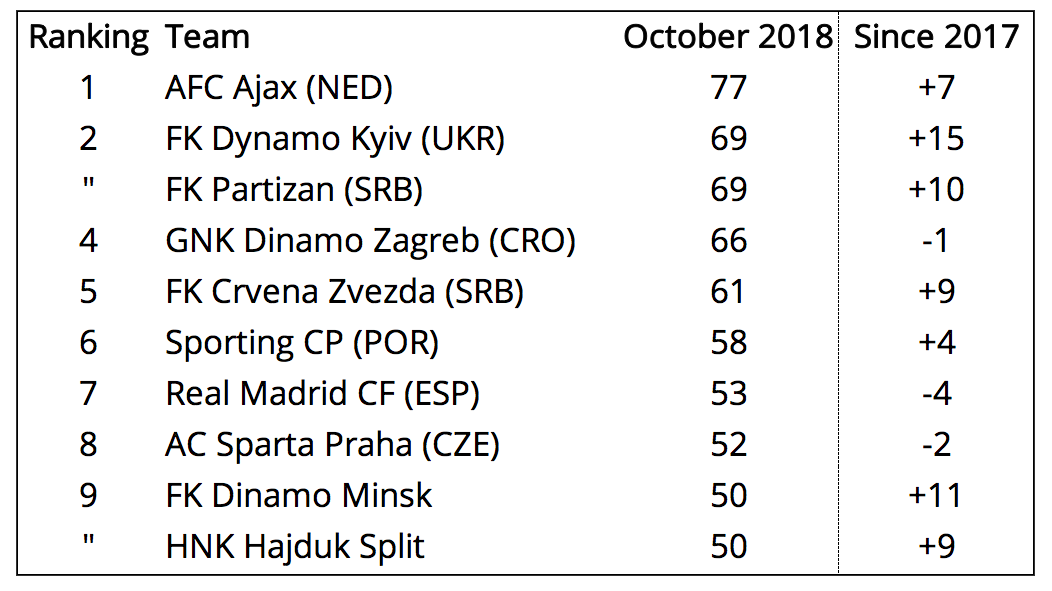 The first Belgian team is ranked 22nd: with 38 trained players RSC Anderlecht's youth academy performs as well as clubs like Man United (38), Arsenal (32), Man City (32) and Atletico Madrid (29) . In the top-50 we encounter a second Belgian club with Standard (34) in 29th place.

If we look at country level, we see that the Dutch Eredivisie has the most number of trained players with 234 footballers, followed by the Serbian Prva Liga (222) and the French Ligue 1 (185). 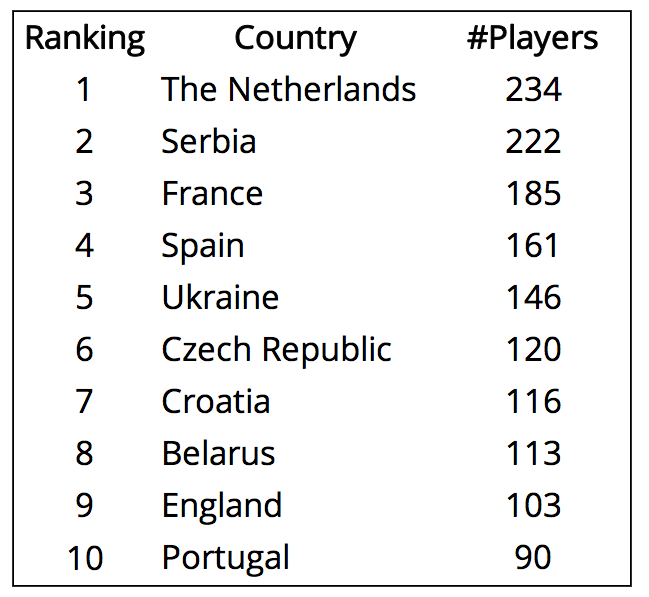 Number of trained players per country active in European competitions

If we focus on the 5 European top leagues (ESP / FRA / GER / ENG / ITA), we see no less than 3 Spanish clubs in the top-5: Real Madrid (36) comes first, Barcelona (34) third and Athletic Bilbao (26) fourth. Also remarkable is that we can find 5 French clubs in the top-10 and that the Argentinian club River Plate (11) is the only non-European club in this list. 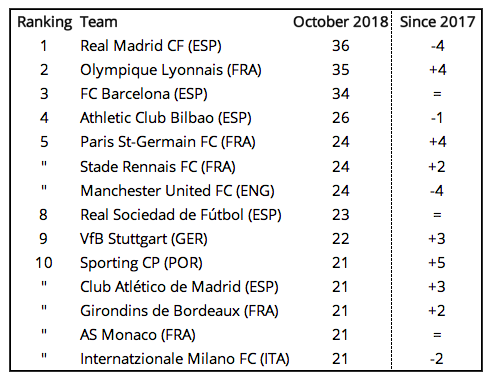 Most playing time in Slovenia

If we look at the percentage of the total number of minutes played by trained players, we see that youth players in the Slovenian league receive the most playing time (26.75%). The top 3 is completed by the Israeli (26.31%) and Swiss (25.52%) first league. With only 6.22% of the total number of player minutes, the Belgian Pro League is ranked 28th at the bottom of the list.

If we look again at the Belgian competition, we see that a club like RSC Anderlecht (22.82%) can compete with other clubs on a European level. 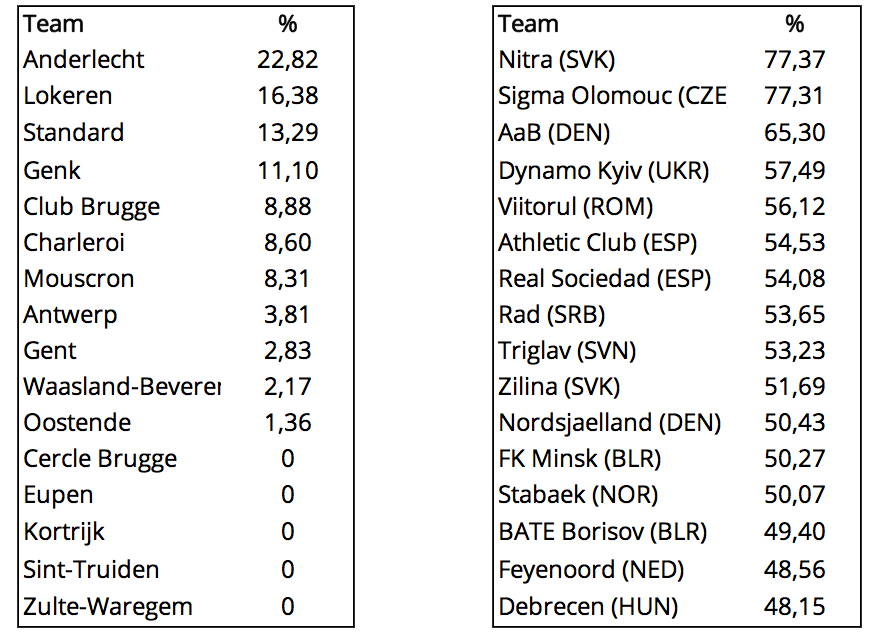 From professional player to Belgian international

We hear it very often in the media: young talents who get recruited by a big club because it would foster their development. But is this statement true? If we take a look at the group of Belgian Red Devils during the last World Cup, 11 out of 23 players (48%) were formed at a Belgian club. 7 (30%) were trained in the Netherlands, 3 in France and 2 in England.

When we look at a club level, we see that RSC Anderlecht is the main supplier of the current Belgian squad with 4 players, followed by Ajax, Genk and Standard with 3 representatives each. 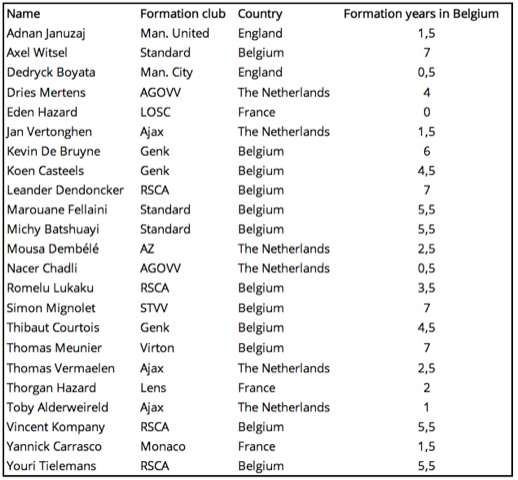 AFC Ajax is the most effective youth academy in Europe and most playing minutes are given in the Slovenian league. With 2 Belgian teams in the European top 50, Belgium is performing quite well. When it comes to playing minutes given, the Belgian Pro League is at the bottom of the list (except for RSC Anderlecht). Despite the fact that young Belgian talents don’t get much playing minutes in the first division, this says nothing about the level of Belgian youth academies: Almost half of the current Belgian squad who are topping the FIFA world ranking were trained in Belgium. Maybe it's time to introduce a rule with a minimum percentage of playing minutes by own trained players instead of a minimum number of trained Belgian talents on the game sheet?